Our history page gives an inside look at some of the defining moments of Peg Perego's past. 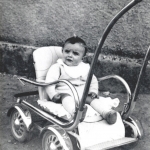 The birth of current company president, Lucio Perego, was the catalyst for Giuseppe Perego to create a "new place" for the "new arrival." It was 1949 when Giuseppe created the finest baby carriage around at the time, using rubberized materials instead of sheet metal and wicker. It also happened to be the first "convertible system" model, which could change from a baby carriage, to a stroller. 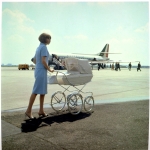 With the economic boom in full swing, the 60s was a time of success and continued growth for Peg Perego. During this span, a number of high quality products made their entry. Among them were the Brigitte, Carole, Iris and Victory carriages, the America and Atlantico folding chassis for transport in cars and the Infanseat -- then known as the safest child seat in the world. The end of the sixties also saw the launch of the Baby-Boy, the first convertible high chair that had height adjustment and a removable seat that could also be used in the car. 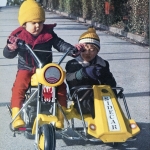 With the 70s came the move from manual to industrial, giving Peg Perego increased capacity for innovation. On the baby side, this meant the introduction of Go-Go, the first stroller with umbrella style folding. This new design made it simple to fold up and carry the stroller and put it in the trunk of the car. The 70s were also an important time in terms of innovation with Peg Perego's children's ride-on vehicles. This time period produced the very first 6-volt products (1970) and the sealed gel-cell battery (1975). 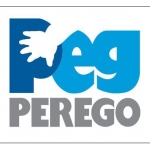 The 1980s was a decade that saw the beginning of a few staples of both the baby and children’s riding vehicles industries. 1n 1982, Peg Perego introduced the first 12-volt, 2-speed system (2.5 and 5 MPH) to the toy world. To this day, the 12-volt children’s riding vehicle is the most popular and the industry standard among riding vehicles for children. The 80s also saw the rise of the Pliko stroller. This dual handle stroller took the baby world by storm and reigned as the most popular stroller for Peg Perego for years.